If you’ve been following me for a while you know that I’m a pretty big fan of babywearing (duh). I’ve been dubbed by my readers the title “Queen of Babywearing” which I don’t take lightly. This means I need to try all of the carriers, so naturally it felt the need to try out Sakura Bloom. Their Scout baby carrier and Onbuhimo carrier have become two of my most-used baby carriers in my collection. Therefore, I figured it was time that I do a comparison of them and share it with you! I also filmed a video in which I show you how to use the Scout and how to use the Onbu. Keep reading to see my full comparison of the Sakura Bloom Scout vs. Onbuhimo. 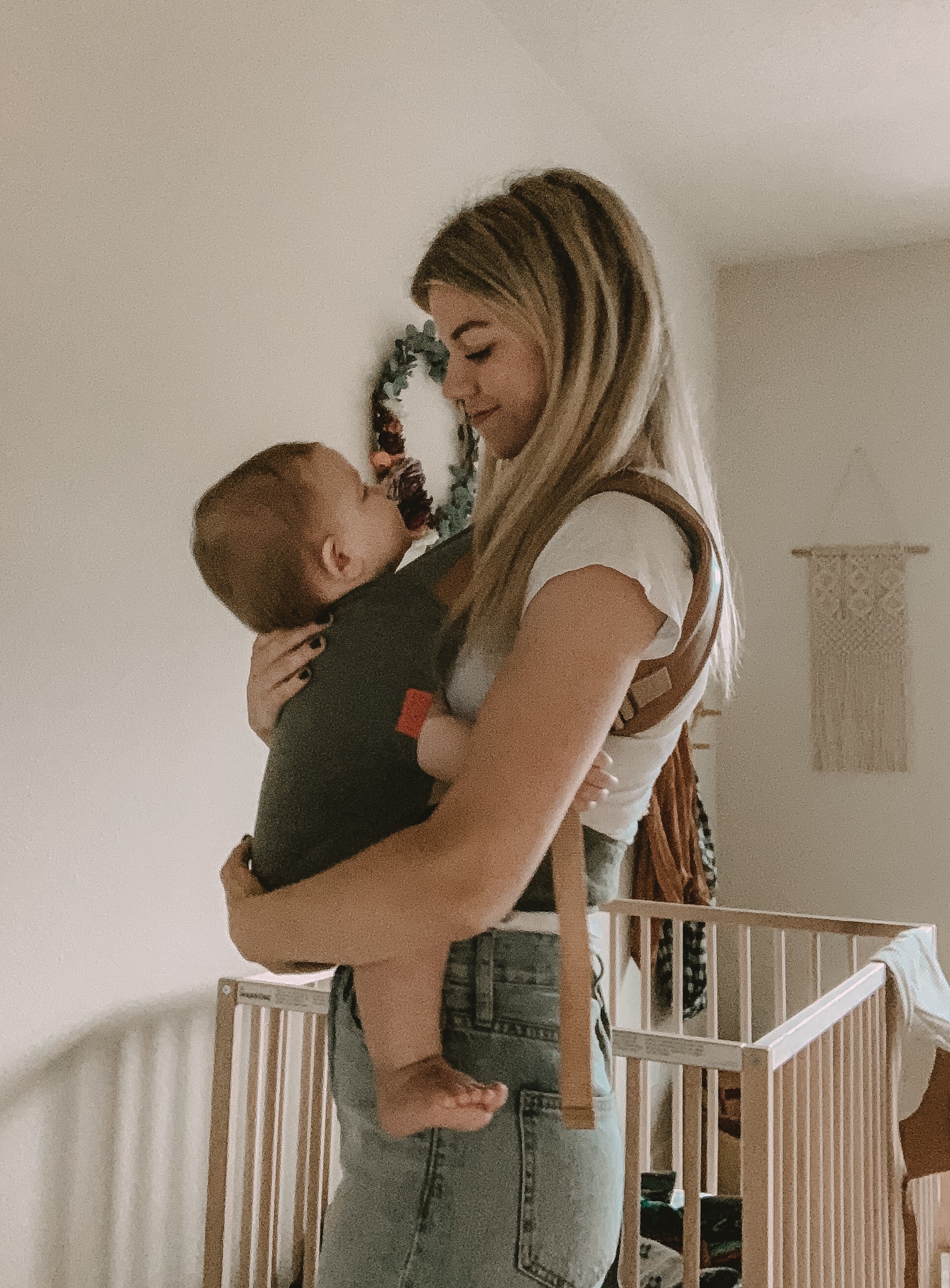 The Onbu can be worn on front or back typically beginning around six months of age. Baby should be able to sit unassisted. Non-adjustable seat.

The Scout can be worn on front and back. Can be used from newborn stage to toddler stage. Has an adjustable panel to adjust seat width. 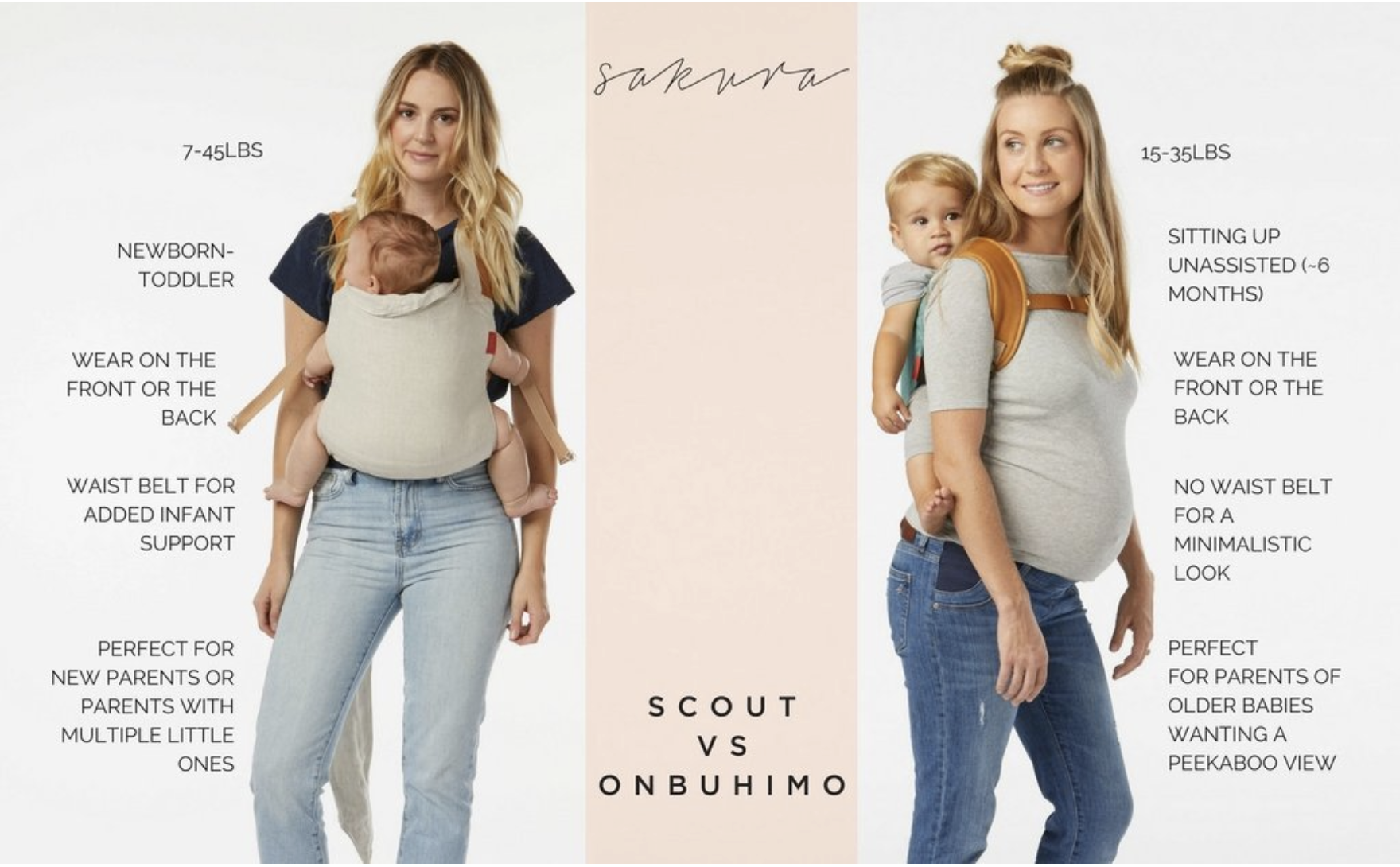 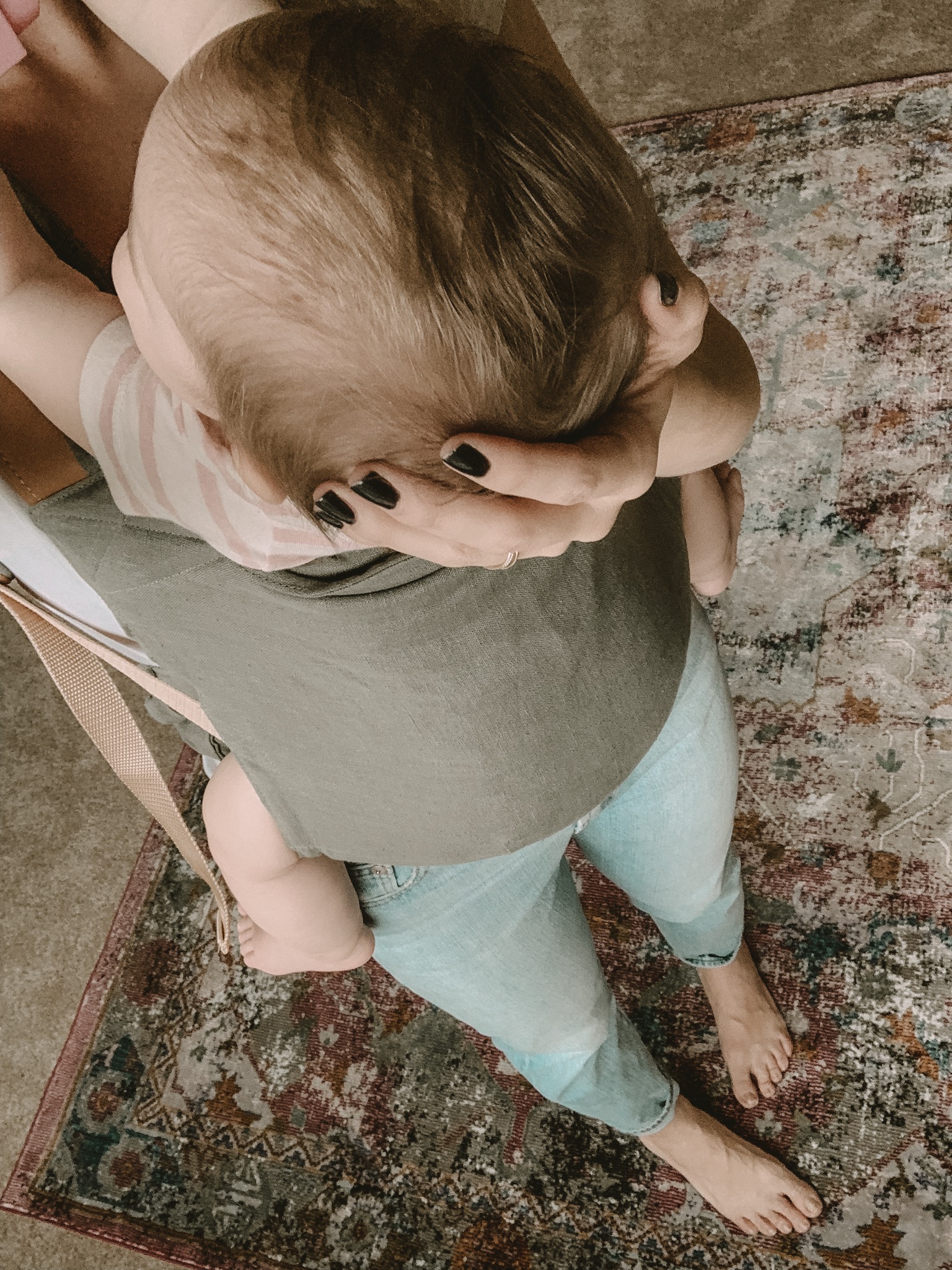 01. Both the Scout and the Onbu can be worn in the front and the back. However, the Onbu does allow baby to sit slightly higher up than the Scout allows for.

02. Sakura Bloom makes both carriers in silk, linen, and bamboo.

03. Both can be worn when pregnant. The Onbuhimo however may be a more comfortable option for during pregnancy.

04. If you look at the photo below where I’m holding both carriers folded up in my hands, you can see how they look folded up. Not much of a difference as far as size when folded, so that’s a plus!

05. Both have a detachable hood that works great for when nursing or baby sleeping in the carrier.

The Biggest Difference Between the Scout and Onbu

01. At first look, the carriers look so similar it might be hard to tell what the main difference is but here is the main takeaway: the onbuhimo has no waist.

Yup, no waist. It seems odd, but trust me, once you get the hang of using it, it’s a great wearing option! Not having a waist strap is great for pregnant mamas who still want to wear. I wish I’d had an onbu when I was pregnant with Norah! The onbu also allows baby to sit super high up on your back so that means they can see everything over your shoulder.

What Else is Different?

02. The Onbuhimo requires baby’s hands to be out when you wear them.

03. They also sit much higher up on you than they would in a Scout back carry.

04. Lastly, the Scout can be used right away (beginning at just 7 pounds, versus the Onbu that can be used starting at 15 pounds and when baby can sit unassisted. So if you have multiple children, say a newborn and a toddler – the Scout would be a great option for your family, as it can be used with both children!

Note: The other thing I noticed is that you have to build up some specific “muscle” for carrying baby on your back in the Onbu for long periods of time. The more I do it, the longer I’m able to carry her in it, little by little! It’s all about building/toning those specific muscles.

I asked a few of you to ask some questions you had about the Onbu, so here are the answers to those if I didn’t already answer them above!

How long did it take you to be able to use the Onbu for long periods of time.

I worked my way up to being able to carry Norah in it for around an hour – little ten minute increments! Took around 2-3 weeks, I’d say!

Is the Onbu hard on your back if your baby is heavy?

Like I said above, it’s about really strengthening those muscles!

Tula doesn’t make an Onbu carrier, so no! I love Sakura Bloom’s minimal designs and fabrics, but I’ll always have a special place in my heart for my Tula’s 🙂

I want to get one but I’d prefer to buy used. Any recommendations?

I see them for sale on Poshmark and Mercari often! There is also a Sakura Bloom buy sell trade page on Facebook! Join that – lots of pre-loved carriers there for sale 🙂

Have you tried Happy Baby Carriers?

No, and I don’t have plans to honestly – I prefer the Sakura style and design!

Overall, I love both of these carriers. I definitely feel like it’s beneficial to have both since they sort of serve a different purpose. I love having my Scout for front carriers for long periods of time. It’s great for nursing, and up until recently I did carry Norah on my back a few times in it as well. I didn’t start using the Onbu until she was around eight months old as she wasn’t sitting unassisted for quite a while. Then once I tried it I found the Onbu magic! The no waist really does feel super minimal and sleek. I love the feeling of not having the restrictive waistband on with certain outfits or in the heat. It’s definitely been a great tool in my babywearing arsenal!

If you have any questions about the Onbu let me know and I will answer them! 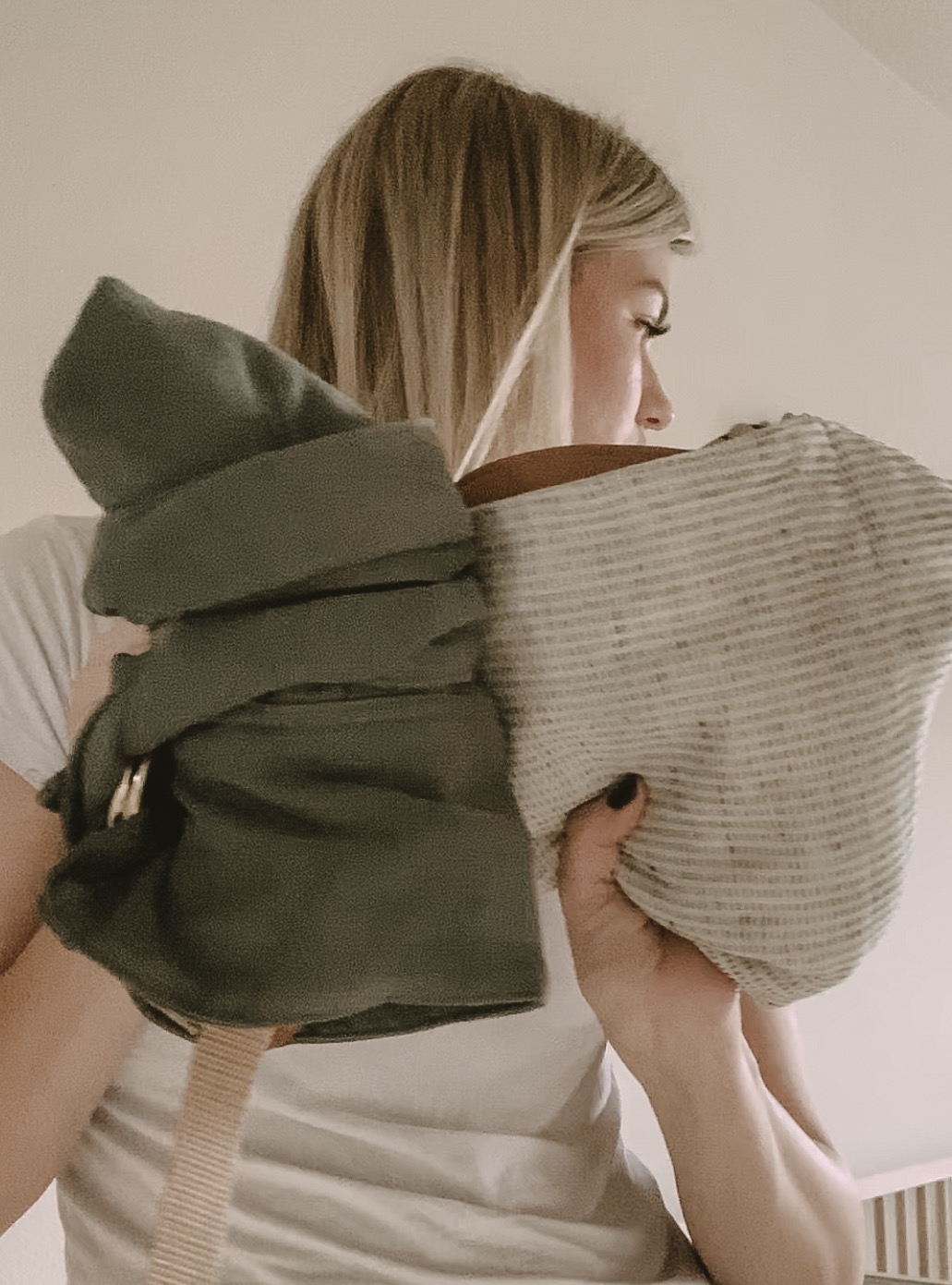 I hope this post Sakura Bloom Scout vs. Onbuhimo comparison was helpful to you!

Thank you so much for reading! 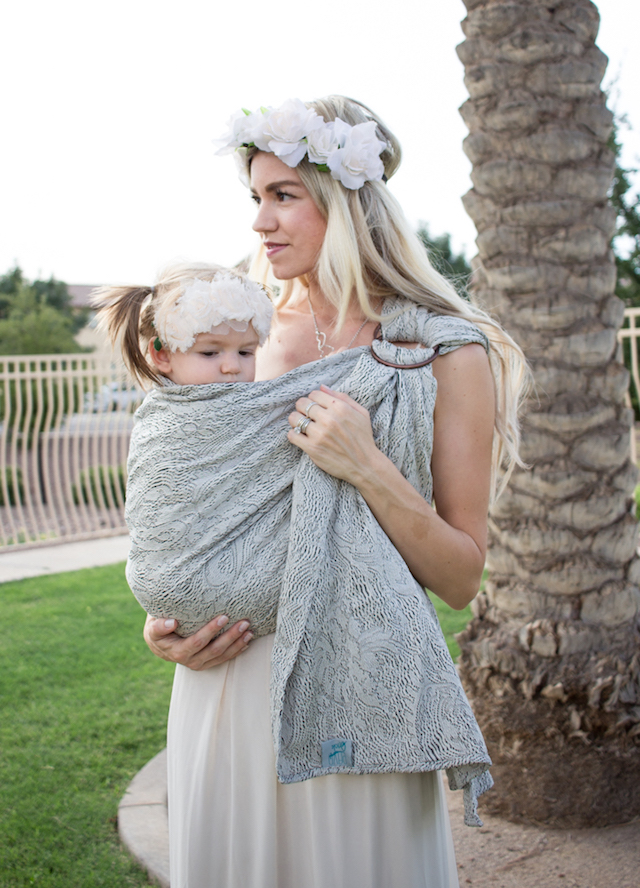 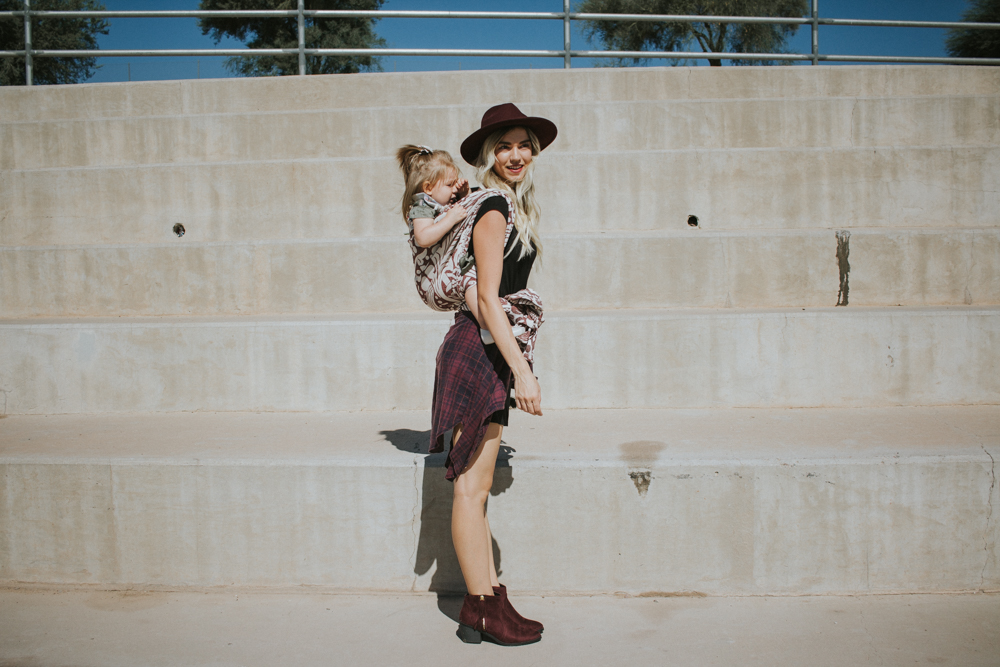 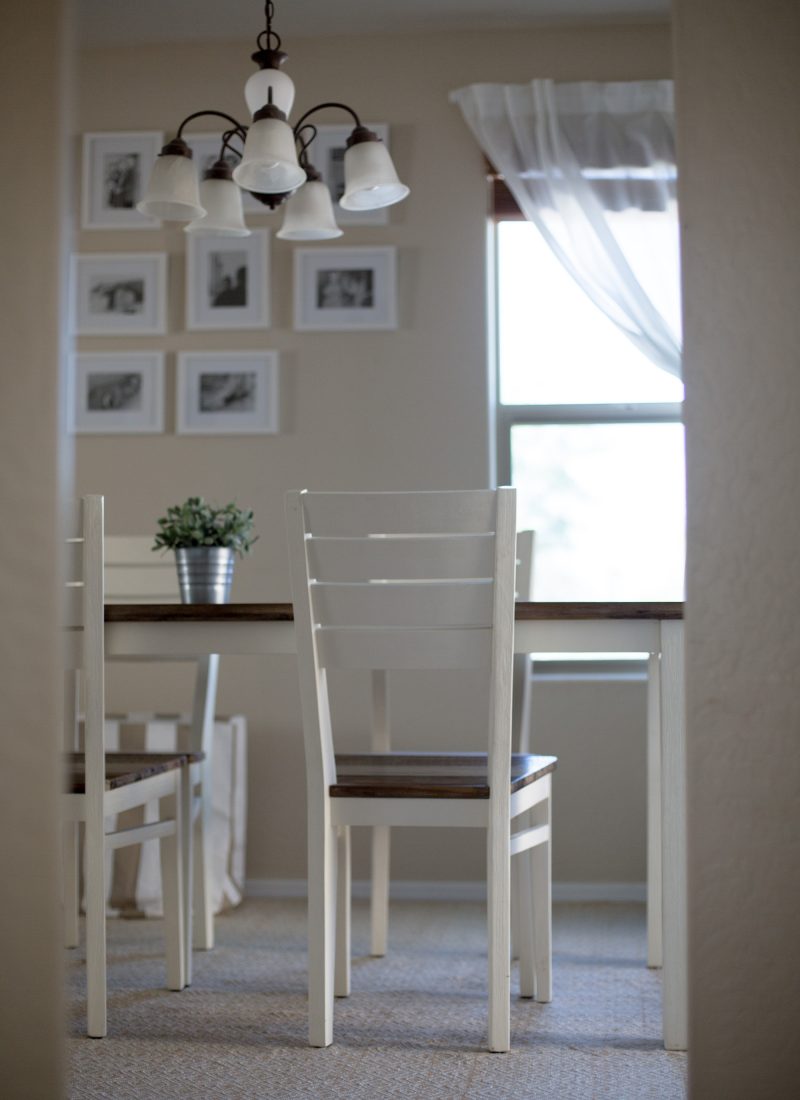 How To Decorate A Minimalist + Eco-Friendly Dining Room 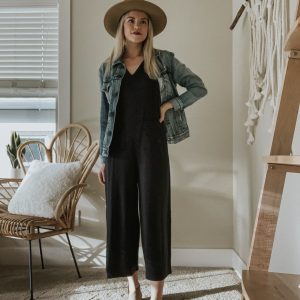 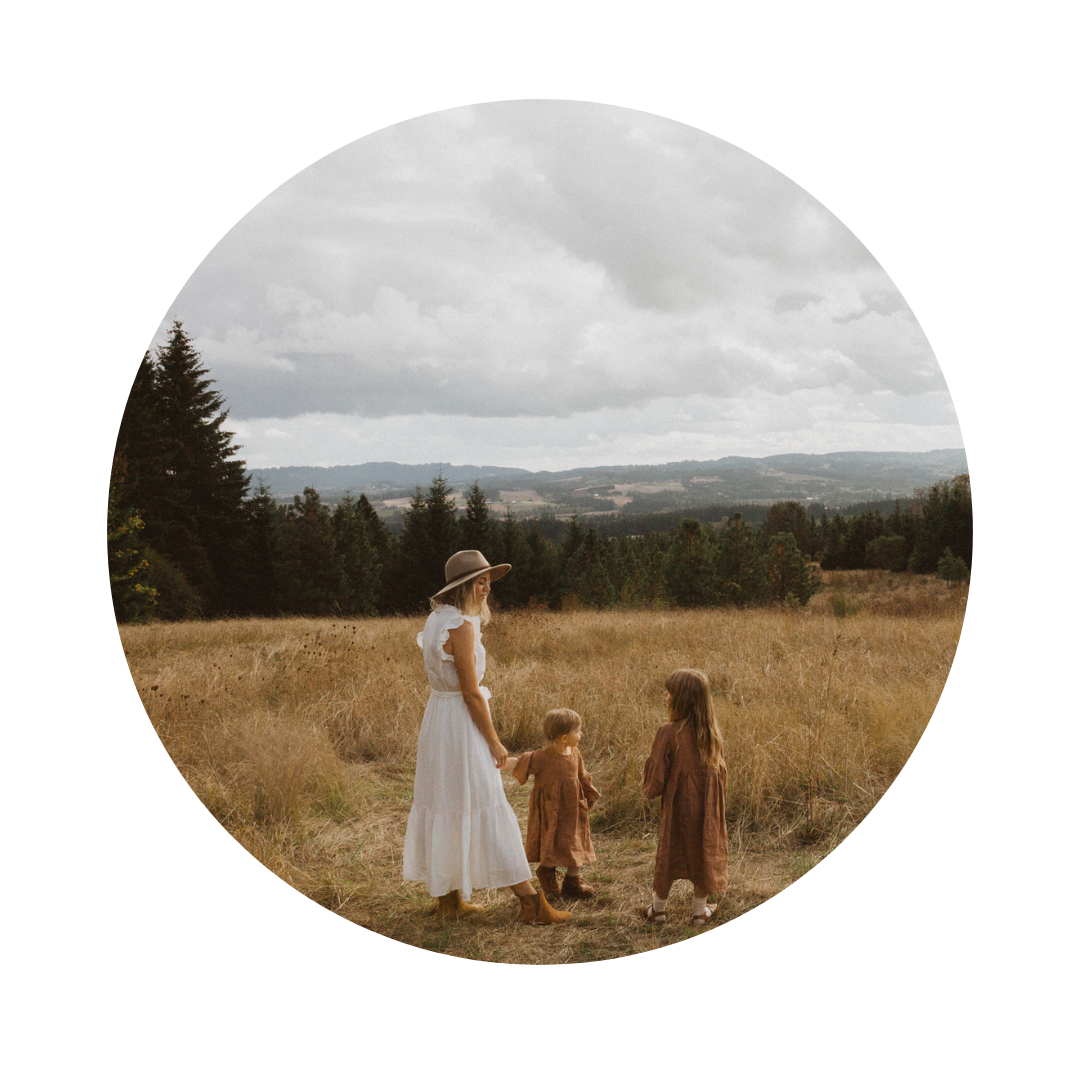 I'm Larissa. A mama to daughters and wife to my college sweetheart. I am passionate about sustainable fashion, whole foods recipes, and Charlotte Mason home education. I also love being outdoors with my family. You can usually find me sporting a wide-brimmed hat, with a baby on my back.